Rugby, rhyme and riotous fun in new picture book about a game to remember, and read again …

With the rugby season in full swing, it’s not just the teams on screen that are out there indulging in the national sport. 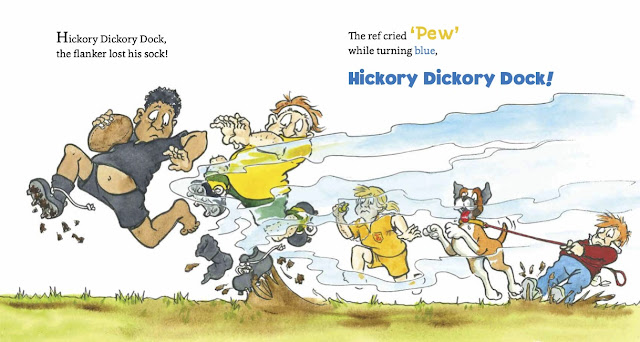 Set in a Kiwi heartland stadium where the field has a few hazards (watch those cow pats) and the players are of a certain age, Hickory Dickory Kick commentates a game of true country footy.

The difference is that this commentary is based on the nursery rhyme ‘Hickory Dickory Dock’, and the action is not just on the field. The flanker loses his sock. The jumper splits his pants, then the halfback hides the ball and the winger gets tangled in granny’s knitting, before the loosehead’s fart clears out the scrum …

That’s a cue for the old dog Buck (‘Hickory Dickory Bark’) to run on the field and take off with the ball, and chaos ensues. 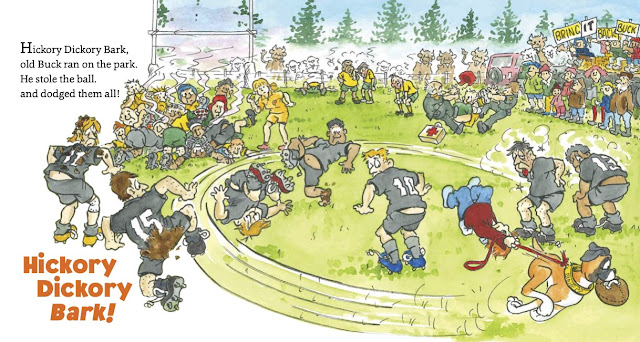 Long-time rugby fans and well-known children’s authors Peter Millett and Bob Darroch team up to share the joy of a game where everyone gets involved.

Hickory Dickory Kick will appeal to primary-age rugby fans and those who love to read to them.

Peter Millett has published over 100 books worldwide, including bestsellers My Old Man, He Played Rugby and The Anzac Puppy. Pete writes fun stories for children from five years and up. A keen rugby fan, he lives with his family in Auckland. (See petermillettbooks.com.)

Bob Darroch has written and illustrated numerous children’s books over a long career as an artist and cartoonist, including the bestselling Little Kiwi series and (for Oratia Books) The Longdrop and Captain Cat. He lives in Temuka, South Canterbury